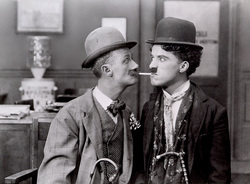 OBJECTIVE: By the end of this page the reader will be provided with a defintion of narrative, an explation of a narrative theory, illustrations of narrative conventions and an explanation of how I plan to implement these conventions into my film.

DEFINITION: The definition of the term narrative is the way in which a story is told through media text.

EXPLANATION: Claude Levi-Strauss, a social anthropologist stated that a narrative subconsciously reflects the values, myths and beliefs of the culture. The reflections are usually portrayed through binary oppositions. The definition of a binary opposition is, a conflict between two qualities or terms, for example good and evil.

DENOTATIONS AND CONNOTATIONS AND ILLUSTRATIONS OF THE GENRE CONVENTIONS IN TERMS OF NARRATIVE: Typically in physically comedic films there is a use of binary opposition narrative (Levi-Strauss) because they generally reflect the state of the society. In Modern Times there is a an absolute conformity because the whole film throughout reflects the introduction of modernity. The binary opposition within this film is between the dominant ideology and the proletariat. The film presents a clash between the classes. This is represented through the location (a factory) and the plot. Within the plot there is a binary opposition of the collapse of society due to the introduction of modernity and the comedy of Chaplin's movement.
In terms of Connections, the binary opposition is presented through the fact that this man is presented as a hard working individual (we assume this from his costume which is a suit and tie) who is so stressed out by the pressures of society and being isolated by society, that he turns to alcohol and commits a crime and he doesn't see what he has done wrong. It seems that Connections represents the binary opposition of good and evil. Within society, people may be good but pressure and stress could lead to evil acts.
HOW THIS LINKS TO MY FILM: In my film I intend on creating a binary opposition between the dull atmosphere and the comedic structure of the three protagonists. There will also be a binary opposition of the seriousness of the police men and the stupidness of the boys. The main binary opposition which will
be represented in my film is the clash between the dominant ideology and the inferior ideology.

DENOTATIONS AND CONNOTATIONS AND ILLUSTRATIONS OF THE GENRE CONVENTIONS IN TERMS OF NARRATIVE: Typically in a British social
realist film, the narrative construction consists of an antagonist that the audience is positioned to either see him as a hero or feel sorry for him while the dominant ideology is constructed to seem positive in this instance. Unlike most films, the reinforcement of the law is seen as positive. As everyone dies in this film, except the protagonist, the rest of the cast are presented with a downfall narrative and with the "angry young man" ideology. In addition, in terms of Levi-Strauss' theory, the audience are presented with a case of good and bad- the antagonist is presented as "good" through the deeds that he does for example looking after someone's child even though he doesn't know who the person is, however the individual is in a "bad" enviornment. This binary opposition presented in this film creates a back story for the antagonist.
HOW THIS LINKS TO MY FILM: In my film I intend on creating a binary opposition between the dull atmosphere and the comedic structure of the three protagonists. There will also be a binary opposition of the seriousness of the police men and the stupidity of the boys.