AIM: Within this section i will be defining the term editing and analysing the ways in which the films Modern Times, Ill Manors and Connections are edited. In addition I will be analysing the film to see if it conforms or deviates from the typical editorial conventions of the selected genres.

DEFINITION: Editing is a way to form a narrative temporally both in the making and the viewing of a film. Editing has the ability to speed up the shooting and viewing process by creating a rhythm of forward action.

EXPLANATION OF EDITING AND LIST OF CATEGORIES: There are three main editing processes: montage, non continuity and continuity editing. Montage editing was theorised by Sergei Eisenstien. The soviet montage theory stated that there are four different elements of montage editing. Metric, which is where the editing follows a specific number of frames which then cut to the next shot regardless of what is happening within the image. This montage is used to enhance the most  emotional of reactions in the audience and is therefore not a typical editorial convention of a physical comedy. Rhythmic, which is cutting based on continuity. Tonal, which manipulates the rhythmic and temporal element of the narrative to have an emotional effect on the audience. Intellectual, the use of combined shots to create an intellectual meaning. Montage editing isn't a typical editorial convention of a physical comedy because they generally do not focus on audience manipulation.
Non continuity editing is a form of editing which has no temporal or spatial continuity. For example in the film "A Bout de souffle" by Jean Luc Godard during the car scene, one minute the screen shows a girl in the passenger speaking and the next there is a jump cut of her with a mirror. There is no continuity here because the audience do not see the girl pulling the mirror out. The editorial technique was typically used in French cinema to emphasise the fact that it's a film rather than real life. 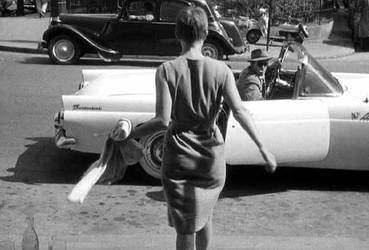 Continuity editing has two elements within it, temporal continuity and spatial continuity. Temporal continuity includes the match on action technique, 180 degree rule and eyeline match. The match on action technique is a uniform, unrepeated physical motion or change within an extract. A match on action is when some action occurring before the cut is picked up where the previous cut left it by the shot.  wreen is seeing. The eyeline match begins with a character looking at something off-screen, followed by a cut to the object or person at which he is looking. For example, a man is looking off-screen to his left, and then the film cuts to a television that he is watching. Similarly, shot reverse shot or 180 degree rule is a technique where one character is shown looking at another character (often off-screen), and then the other character is shown looking back at the first character. Since the characters are shown facing in opposite directions, the viewer assumes that they are looking at each other generally this shot is used for conversational means. Continuity editing makes things easier for people to follow, and as physical comedies appeal to children contunity editing is a typical editorial convention of the genre.
ILLUSTRATION OF EDITORIAL CONVENTIONS WITHIN A PHYSICAL COMEDY: Typically, within a physical comedy the editorial conventions are purely continuity editing. Continuity editing is mainly used for comedies because their target audience range to children because it makes the story easier to follow.  An example of continuity editing within the clip is during the scene when Chaplin is used to try the machine. Within this clip there is a use of match on action. It is
evident that this technique is used when Chaplin's boss places the screws on the table. The first shot is of the boss reaching to the table, it then cuts to what
he has placed on there. By doing this, the editor is creating a comedic element within this scene. By cutting to a close up of the screws, the audience become
aware that Chaplin is about to eat them. 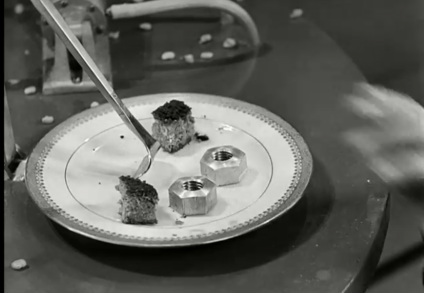 This image shows the boss placing the screws on the plate.
Another example of continuity editing used in this clip would be the use of eyeline match. The editing in this clip shows contrasting reactions to the disastorous event which is occuring, Chaplin's character (the inferior ideology) portrays the confusion to the new invention whereas the dominant ideology show concern in their facial expression. An example of this within the scene is when Chaplin's character (the tramp) is being fed by the machine. The camera is pointed towards Chaplin from the audience's point of view, it then moves to the height of Chaplin and points down to reveal a close up of the sweet corn. 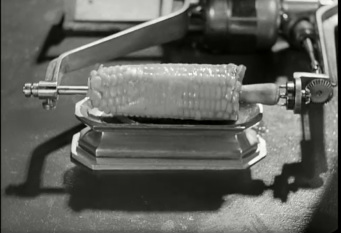 This image shows the reveal of the sweet corn.
As the tension mounts the temporal aspect is manipulated and sped up.  The tension mounts when Chaplin becomes frantically confused about the technology. Within the scene, Chaplin is being fed by the machine, and the editing rapidly cuts from Chaplin's face to his boss and the clients. This is an example of parrallel editing because two or more things are happening within the same location.  The fact that the editing speeds up throughout plays with the audience emotions because it makes the audience excited for what is about to happen, it also makes the scenario seem more comical.
An example of match on action within the scene below would be when Chaplin chases the woman out of the factory. As they leave one room they are running and it cuts another room where they are still running. This almost shows the audience that they haven't stopped running even though the next frame could've been shot before or a while after. The continuity of the match on action technique makes everything easier to follow and is typically used in physical comedies because of this.

The image above shows the development of the match on action technique used during the chase scene.
The editorial conventions conform to the physical comedy and do not deviate at all.

EXPLANATION OF HOW THIS LINKS TO MY FILM: Within my film I will conform to the physical comedy genre because the main editiorial aspect will be continuity editing. I will also speed up the editing process during the chase scene to make the audience feel the tension the characters would be feeling.

ILLUSTRATION OF EDITORIAL CONVENTIONS OF THE FILM ILL MANORS: Within the I am analysing the first significant piece of editing is during the conversation between the two inmates. This is called shot reverse shot. There is a shot reverse shot technique of two pairs of shoes to show the audience who is talking when because there faces are never shown. This also enhances the comedy of what they are saying.
An example of a montage editing within this scene would be during the same scene where one of the drug dealers within the film is sitting in prison and is having flashbacks of his childhood. There is a use of slow metric montage. Throughout the montage there are overlaid images of the character as a child in a home. By doing this, Plan B is positioning the audience to feel a sense of remorse and empathy for this character because the montage shows him as an innocent child. In addition, as the main location of this scene is a prison, as the audience you are drawn to feel sorry for what the characters life has turned out to be like. This montage reflects the down fall narrative of the characters life. (Starting from an innocent child and ending up in jail).
During the opening sequence of the film, there is a use of rhythmic montage which reflects the life of a drug dealer. The montage reveals the drug dealers' routines. An example of this would be of one of the drug dealers measuring out drugs and taking phone calls from customers. In addition, the montage shows the affect of drugs. As the audience you see people taking drugs and their quick deterioration as a result. This montage could potentially reflect two things, one being the mind of someone who takes drugs because it is frantic and quick or it could reflect the fast pace business of being a drug dealer.
EXPLANATION OF HOW THIS LINKS TO MY FILM: Within my film, there will be no use of montage because I am focusing on the silent film editorial conventions, however I plan to speed up the editing during the chase scene to build up the tension within it.

ILLUSTRATION OF EDITORIAL CONVENTIONS WITHIN CONNECTIONS: Like other black and white films, there is no montage editing in Connections. There is only continuity editing. However, there is a manipulation of time in the film which evident because the character is shown sleeping and the lighting and location changes. Within this scene, the location goes from inside the antagonist's house on the sofa to outside in a park. In addition, the lighting in "real time" is  dark because as the narration reveals, it is early in the morning, whereas in "the dream" the lighting is bright because it is during the day. This is evident because the sun is out. 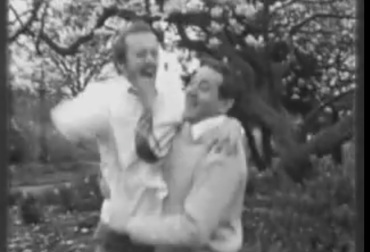 The image above illustrates the connotations of the "dream world".
An example of continuity editing within this film would be during the scene where the protagonist is doing something on the table while eating a sandwich. At first, the audience see the protagonist eating a sandwich while fiddling with something on the table, then this action cuts to an image of a face made out of crisps.

These two images show the editing from the shot of the protagonist eating a sandwich to the table.