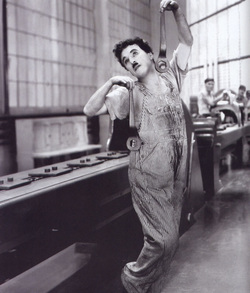 AIM: Within this section of my portfolio I will be defining the term ideology as well as exploring the different ways in which Charlie Chaplin portrays ideology in the film "Modern times" and finally i will be analysing and defining the theories of ideology, I.e. Gramscy and Marx and the theory of interpellation theorised by Althusser. I will be using denotations and connotations to interpret an ideological structure of Chaplin's "Modern Times".

DEFINITION: Ideology can be defined as the body of ideas reflecting the social needs and aspirations of an individual, group, class, or culture.

EXPLANATION: According to Karl Marx (a philosopher of the 19th century) the ideological structure within our society is that the ruling class or the dominant ideology is the upper class and the lower class are the inferior ideology. However Marx wanted a classes society. This concept originated from Gramsci's theory of the hegemonic structure. The definition of hegemony is an indirect form of govermental influence within the society. The Hegemony theory is a theory which describes the way the society is structered. It entails that the dominant ideology or the ruling class are in complete control within society and the inferior ideology or the working class has no say in the way that the society is run.
DENOTATIONS AND CONNOTATIONS AND ILLUSTRATIONS OF THE GENRE CONVENTIONS IN TERMS OF IDEOLOGY: In terms of ideology the typical
genre conventions of a physical comedy are, that there is a dominant, or hegemonic, ideology and an inferior ideology. This convention is a generally
shown or portrayed in a comical manner. For example there would be a police chasing a thief. This concept links to the film "Modern Times" by Charlie Chaplin because throughout the clip, Chaplin portrays an ideological structure. For example he is working in a factory (proletriat) and is forced by his boss
(petit bourgeois) to try out a new machine, thus creating classes within society. However within the clip (which begin around 4:00) from Modern Times
Chaplin (the protagonist) comicly mimics the petite bourgeois during the "chase" scene by doing balletic movement and squirting oil in there faces.
Interpellation is a concept described by Louis Althusser as the process by which ideology and politics constitutes the nature of the individual's (within
society) identities through the very process of institutions and discourses of 'hailing' them in social interactions. Although the film portrays the hegemonic
strcuture through people or individuals it also shows how individuals are interpellated by the idea of new technology thus creating a hegemonic structure
between individuals and technology. As previously discussed in the mise en scene, a hegemonic structure has also been potrayed through the characters
costumes and characterisations.

Throughout the film "Modern Times"  Chaplin or The Little Tramp portrays the individuals within the society and his bosses portray the government. The most significant part of the film where this theory is clearly portrayed is in the section where the protagonist (Chaplin) is forced to try out an experiment which fails. This is the representation of the passive ways of the individuals within the society and then the collapse of our society. At the time, Modern Times and other Chaplin films were popular with everyone because it was something different. The variations between comedy and social issues allows a whole range of people to enjoy the films. However, nowadays Chaplin's films are drawn to people who are more film literate and educated in the film industry because of the development of the film industry. Due to the comedy with an underlying political issue i would say that the target audience would range from children to the older generation however i believe the target class would be lower class.
HOW THIS LINKS TO MY FILM: In my film there will be a clear hegemonic structure portrayed. However it will be shown in two ways. Firstly the dominant ideology will be the three hoodlums of East London and the proletariat will be the common man because they will live in fear of the hoodlums, however as the piece progresses the hoodlums become inferior when the police or the government get involved. This will also be explored in the costumes and locations.

DENOTATIONS AND CONNOTATIONS AND ILLUSTRATIONS OF THE GENRE CONVENTIONS IN TERMS OF IDEOLOGY: In terms of ideology the typical genre conventions of a social realist/British crime drama are, that there is a dominant ideology and an inferior ideology, hence the construction of a hegemonic structure. This convention is a generally shown or portrayed through the hegemony created between the police and the hoodlums.  The police or the law are the dominant ideology because they are in control and have the power over the hoodlums who are the proletariat. Examples of this within the film would be the scene where Aaron (the protagonist) gets stopped and searched by the police for looking "suspicious". In terms of media language, the ideology is presented through the
fact that the police occupy a large space throughout the scene, there are two police versus one hoodlum, the audience are always seeing the scenario from the
police's perspective, and lastly in terms of costume, the police are in uniform which is generally associated with a high status. 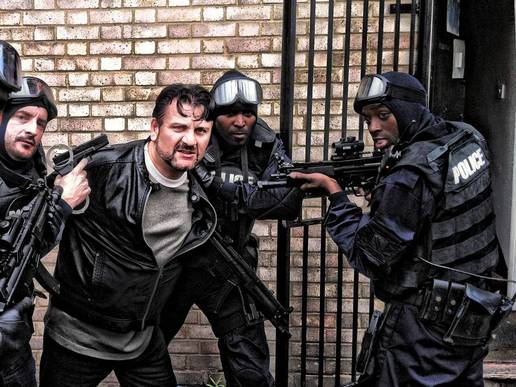 Here is an illustration of the hegemonic structure described above.
Ill manors expresses the people who work in the drug industry as real people who have been brought up in this kind of world. Ideologically, it shows these individuals to be criminals who never recieved an education and had a tough upbringing. In terms of the film, if we look at the scene where a female is sold by two drug dealers as a prostetute, there is a flash back of her child hood and the narration reveals she was sexually abused as a child and believes that is all she is worth. From this, it is clear that the film puts things into perspective and is making a political statement about the divide in society. By divide in society im a stating that economically if you are of higher status you can get an education and flourish within society and if not there is a chance that you end up in a horrific lifestyle for example prostetution.
HOW THIS LINKS TO MY FILM: In my film there will be a clear hegemonic structure portrayed. However it will be shown in two ways. Firstly the dominant ideology will be the three hoodlums of East London and the proletariat will be the common man because they will live in fear of the hoodlums, however as the films progresses the hoodlums become inferior when the police or the government get involved.